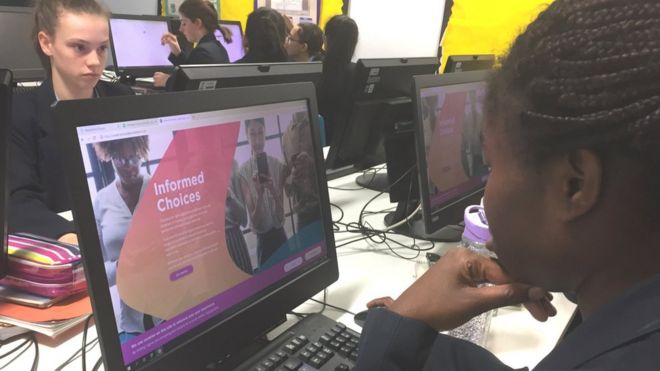 The top research universities in the UK are changing their advice for young people choosing A-levels subjects.
An interactive website from the Russell Group has just been launched to replace a controversial list of traditional academic subjects said to help entry.
Many arts organisations said the old approach led to creative subjects being marginalised in schools.
The new more flexible approach allows a wider range of A-levels to be highlighted.

On the new website, pupils will be able to type in a subject area and see the range of degrees on offer or choose a particular university course and see what A-levels they would need to secure a place.
Creative subjects and other less traditional disciplines, such as psychology, are given more prominence.
The previous advice was largely based on a core list of traditional academic subjects, such as the sciences, maths, English and languages.
The new approach has been tested with the help of pupils in about 50 schools over recent months.
Hannah, in Year 10 at Archbishop Blanch School, in Liverpool, said: “It was set out amazingly well.
“It gave me a wider view of what I know I can do as a university student and which kind of universities I can go to.”
Amelia, who wants to be a lawyer, said: “At first, I was thinking I wanted to do vocational studies like law and criminology and things like that – but now it’s told me it’s pretty essential to do English, so obviously I’m going to pick English.
“It’s good as well they showed us studies that might provide some extra help – but you can also take different studies as well, it doesn’t matter.”

The head of sixth-form, Rob Clarke, said the previous advice, in a lengthy dry text document, wasn’t easy for either pupils or their parents to digest.
“The list of facilitating subjects had the effect of really narrowing the curriculum,” he said.
“It has led to many of the creative subjects being sidelined and has perhaps given the idea of some of our students that certain subjects are less worthwhile, which is unfortunate for those creative A-levels that are really valuable. “
The Russell Group, of 24 research-led universities, said this effect had been unintended and many universities accepted and encouraged a wider range of study.
Prof Alex Neill, Vice President at the University of Southampton, said for engineering degrees, tutors often looked for students with an art or design subject, alongside A-levels in maths and physics.
But, he added: “The fundamental problem is that the list was all too often interpreted as these are the subjects you must do to get into this kind of university – and you mustn’t do anything else.”
Sir Nicholas Serota, who chairs the Arts Council, said many universities had been surprised the old list had been “taken as gospel”.
But it had been hard for teachers to recommend a wide range of subjects when it had appeared that some subjects would “help you get a place”.
Sir Nicholas said the new website “makes a very significant change because it’s about encouraging young people to consider a whole range of subjects and understand they don’t need to specialise at the age of 14 or 15”.
Previous Post