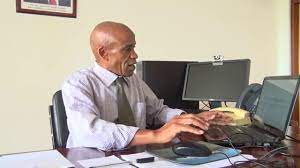 In 1983 he was a teacher at Kibohehe Secondary School. In 1984 he worked as a labor inspector in the Ministry of Labor and Welfare. In 1991 He obtained Master of science degree in Informatics from Havana University. In 1992 he worked as an assistant lecturer in the Department of Mathematics, University of Dar Es Salaam.

On January 29, 2022 Professor Mselle was appointed by the President of the United Republic of Tanzania  as the Chair of the Information and Communication Technology Commisson.

Professor Mcelle previously served as principal of the College of Informatics and Virtual Education at University of Dodoma.

This book provides a solution to this problem by employing simple concrete models called RAM diagrams to present the material for novices. The approach emphasizes on the basics to ensure that every aspect is clearly understood with absolute ease. Learning programming can be fun.

This book, like others, by the same author, relies on the prowess of Memory Transfer Language (MTL) to illustrate all introductory programming concepts. With MTL, novice programmers are given a simple compass which enables them to compare what they think the machine should do, with what actually the machine is doing. In this way they avoid misconceptions which are rife in programming. MTL has turned learning and teaching programming into a sort of fun.

Java for Novice Programmers offers a completely new approach to leaning programming. Using Memory Transfer Language (MTL) a leaner is able to interprete his/her code outside the machine. MTL is a tool for the learner to interpret the code machine-wise. This provides the leaner with a tool for precise close-tracking and debugging the code outside machine environment. It turns programming into a simple task that requires the knowledge of one easy technique: “knowing what is the effect of your instruction to the machine.

With looming threats from hackers, identity and corporate data thieves, it is impossible to avoid doing penetration testing at the corporate level so as to ascertain the security of the network. The more ubiquitous penetration testing becomes the more likely secure most organizations become. This paper demonstrates how to use banner grabbers and packet sniffers to collect important information related to security issues at the corporate level. Experiment on the use of banner grabbers and packet

The integration of technology in teaching and learning processes is a pre requisite for fully realization and development of learners’ potentials for the demands of this technologically-oriented 21st century (Cynthia, 2007).

The realization of the OST potentials as a learning avenue and hence the opportunity to foster the application of educational technology is necessary to improve the academic performance of primary school learners in Tanzania.

Some of projects and researches supervised by professor Leonard J. Mselle

Prof  Mselle will be remembered and honored for his MTL invention
Memory Transfer Language (MTL) is a paper-and-pencil device that mimics computer memory (RAM). It is used to aid novice programmers to understand their codes. Functionally, MTL is used by the programmer to interpret his/her code the way the machine uses compilers/interpreters to understand codes.